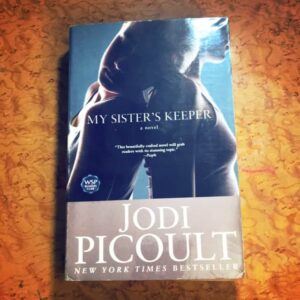 Grab some tissues! This book is an intense read that addresses tough issues but is well worth the read. It is not for the faint of heart, but once you pick it up, good luck putting it down.

We would love to know your thoughts, or if you have any suggestions for a book, please email Tyla Johnson and we will post your book!

Like most teenagers, Anna is beginning to question who she truly is. But unlike most teenagers, she has always been defined in terms of her sister – and so Anna makes a decision that for most would be unthinkable… a decision that will tear her family apart and have perhaps fatal consequences for the sister she loves. My Sister’s Keeper examines what it means to be a good parent, a good sister, a good person. Is it morally correct to do whatever it takes to save a child’s life… even if that means infringing upon the rights of another? Is it worth trying to discover who you really are, if that quest makes you like yourself less?

My Sister’s Keeper was the first book that I purchased by Jodi Picoult and has turned into an obsession since that time. This book has an intriguing subject that challenges science and genetically modifying embryos to create “perfect matches” for individuals with health needs. The story jumps around from the characters points of view, and can be difficult to follow, some have better plots than others, and really, I only wanted to know what happens to Anna and her legal emancipation from her parents. While there were parts of the story that were needed to give some insight into the characters lives, some of the story lines could have been left out. I really was not interested in the romance between the Lawyer and Julia, who is Anna’s ad litem, or the out of control brother, Jesse. The one thing that this book left me with was a perfectly torn idea on who to actually support in a case like this. At times, I was sympathetic towards Anna, but others, I wanted to shake Anna and shout my support for Sara, the poor mother.

Now, for the ending, I will not ruin it, but if you have read the book and then watched the movie, I sense you may have had the same outcry that I did.

I am eager to hear your thoughts!

© TravelNurse.ca – a division of Solutions Staffing Inc.
All Rights Reserved.  Privacy Policy | Term of Use
Site by