The Heart of the Lakes District is Burns Lake, a vibrant and modern community on the Yellowhead Highway that has retained its pioneer spirit and small-town charm. Burns Lake’s first inhabitants were the Carrier First Nations communities that spanned much of the Lakes District and beyond. Burns Lake itself began as a small rest stop for travellers on their way to the Yukon Gold Rush. This community is considered to be the gateway to Tweedsmuir North Provincial Park and Protected Area.

Burns Lake has gained world renown from the International Mountain Biking Association for its 90 km network of trails on Boer Mountain. The trails continue to draw mountain bikers from all over the world and are expanding every season. In the winter months cross country skiing is very popular at the Omineca Ski Club. Lakeside Multiplex includes a hockey rink, curling rink, rock climbing gym, a squash/racquetball court, a fitness facility, and multi-use rooms. This facility is located on Spirit Square, a large outdoor park with a playground, a beach, a walking path, outdoor fitness equipment, two tennis courts, and a skateboard park.

In town, don’t miss the infamous Bucket of Blood, an old log tavern with a colourful history as a fur trading post and gambling den during the 1920s and 1930s. The Lakes District Museum is one of the premier small-town museums in BC, which tells the story of the pioneer days and houses turn-of-the-century treasures of the area’s history, including a 1920s operating room.

Visit BC’s smallest provincial park, the one-hectare Deadman’s Island Provincial Park, an island in Burns Lake. With almost twenty lakes in the immediate vicinity, this diminutive freshwater fishing paradise is the place for sport fishing for cutthroat and rainbow trout, char, kokanee, lingcod and salmon. Locals will give you the latest fishing tips and directions to take into the wilderness. 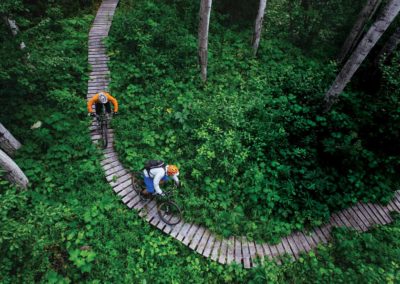 Winter Activities: The arrival of snow turns the Lakes District into a winter playground, with recreation including ice fishing, skating, snowmobiling, and world-famous cross-country skiing on the trails maintained by the Omineca Ski Club.