Old Town. New Town. South Town. These are some of the names of the villages of the Hazeltons. ​​​​​​​Located close to the junction of the Bulkley and Skeena Rivers and nestled within the spectacularly rugged Roche de Boule Mountain Range in Northern British Columbia, few places blend natural wonder, ancient culture, frontier history and community charm so well.

The original Hazelton settlement, built on the flats where the hazel nut bushes grew thickly, began as a riverboat stop. South Hazelton or “South Town” and New Hazelton or “New Town”, sprang up with the building of the Grand Trunk Pacific Railway in the early 1900’s. It is located near the site of the ancient Gitksan village of Gitanmaax and is one of the oldest communities in northern British Columbia. The area is known as the historic heartland of northwest British Columbia and has been the home of the Gitksan and Wet’suwet’en people for centuries. Today, you get an insight into the rich Native culture and history of the Northwest Coast when you take a drive to the communities in the Upper Skeena region. The Hazelton area is home to many splendid creatures, as you drive through the area watch for grizzly bears, black bears and even the rare Kermode bear. You may also see deer, moose, eagles, hawks and many other smaller creatures. If you are really lucky you may be able to see spectacular sights such as eagles and bears fishing. Always have your camera ready as you never know when you will happen upon the next natural wonder!

A walking tour of this authentic frontier community includes antique pioneer machinery displays, an original steam donkey, heritage sites, the Pioneer Museum, a riverboat replica, and the 100-year-old St. Peter’s Anglican Church. Artifacts and old photographs at the Hazelton Pioneer Museum and Archives, located in the Hazelton District Public Library, reflect the odd mix of commerce and culture that existed in the boomtown era. Hazelton was a place of frenzied commercial activity and a bastion of Euro-Canadian religion and culture. These forces mixed with the rich traditions of the Gitksan and Wetsuwet’en First Nations to form a truly unique wilderness society.

‘Ksan Historical Village is a world-famous native heritage site located right where the Bulkley and Skeena rivers meet. As a replicated ancient village, ‘Ksan illustrates features of a Gitxsan village from the past. Like its predecessors, ‘Ksan’s houses form a line with each building facing the river. Making the large decorated house fronts and totem poles of the village visible from the water. Along with other features,  the smoke house and food cache, ‘Ksan illustrates characteristics typical of a past Gitxsan village. 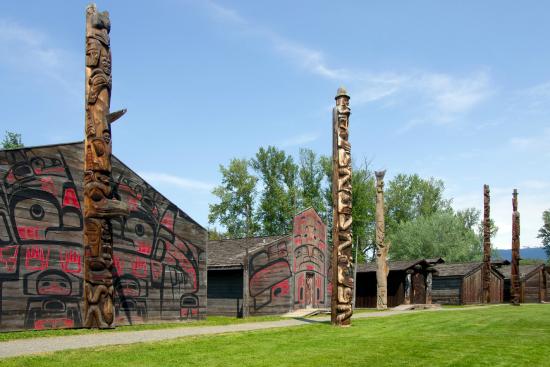 The present Hagwilget Bridge was the highest bridge in Canada at the time of its completion in 1931, stretching 460 feet and 262 feet above the river, and was one of the last single-lane bridges built in Canada. It is a must see and although the walk across is scary it is absolutely worth it!

Many special events are held in the region, if you get the chance make sure to check out the Kispiox Valley Rodeo, which has been dubbed the biggest little rodeo in the north. The Kispiox Valley Music Festival is a unique family event of eclectic musical styles nestled in an idyllic mountain setting that attracts attendees from all of North America. You can also participate in Pioneer Day and Gitxsan Cultural Days in the Summer months! If you are in the area during Winter, the District of New Hazelton hosts Winterfest in Allen Park. There is a huge bonfire, marshmallows for roasting and an incredible firework display for all to enjoy.

Seeley Lake Provincial Park: The Hazelton Mountains and the sheer pyramid of Mount Roche Deboule form a dramatic backdrop, and Seeley Lake provides trout fishing, canoeing, and wildlife viewing. You’ll also find a fascinating Native legend about a mythological monster associated with Seeley Lake posted here. Nearby is the “Ksan Historical Village and Museum, the village was originally called the Skeena Treasure House, and with good reason, judging from its rich display of totems, jewelry, and clothing. A museum in one of the long houses honours the Gitksan ancestors, who were graced with such abundance that they had time to beautify the items they carved for everyday use. Seven lovingly decorated long houses are grouped together here at the confluence of the Skeena and Bulkley Rivers. Several of the long houses are open to visitors at no charge, while guided tours are offered of the Fireweed, Wolf, and Frog clan houses for a small fee. Many great recreational activities are available in this provincial park such as canoeing, cycling, fishing, hiking, swimming, wildlife viewing and ice skating during the winter months.

Bulkley Junction Provincial Park is a beautiful piece of land along the Skeena River, just south of where the Bulkley and Skeena Rivers join and lies in the asserted traditional territory of the Gitxsan people.  Vegetation is unique and consists of a small area of Interior cedar and hemlock. An old cart trail and possibly a grease trail may have passed through the area. Canoeing, fishing, and cycling can all be enjoyed while visiting!

Anderson Flats, also known as Mission Flats or The Forks, is located within the traditional territory of the Gitxsan First Nation (People of the River of Mist) and is identified as Lax Lit Hetwit House territory. Anderson Flats Provincial Park is a 99-hectare area situated at the confluence of two of the most important rivers in northwest BC, the Bulkley and Skeena Rivers. The landscape of the park has been shaped by these rivers over thousands of years, creating the floodplain and terraced terrain. Anderson Flats Park provides world-class fishing opportunities with the peak angling season occurs late July through early September. You can take part in a plethora of activities here, such as canoeing, cycling fishing, hiking, wildlife viewing, cross-country skiing and snowshoeing!

There is lots more to see and explore in the Hazeltons, the longer you stay the more of the rich history, attractions and recreations you will discover!