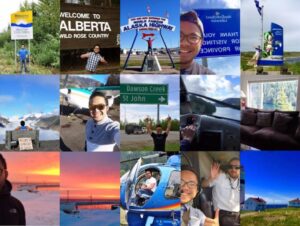 MANILA – Wouldn’t it be nice to have a job that pays well and lets you travel at the same time?That’s what Mark Hernandez has been doing for the past three years now.
The 28-year-old Filipino is a travel nurse in Canada.
“Travel nurses are like ‘locum’ doctors. They come to isolated communities where they need healthcare staff. You are basically a hospital nurse. Sometimes, the only nurse in the community because they find it hard to recruit regular nurses,” he explained.
Hernandez wanted better opportunities for himself so he applied online for a job in Canada. Five months later or in December 2009, he set foot in a new country he now calls home.
“I came to Canada by myself not knowing anybody,” he said, adding that it was his first overseas job and also the first time to travel outside the Philippines.
The Far Eastern University (FEU-Manila) nursing graduate said his sponsor paid for everything and even gave him a five-figure Canadian dollar signing bonus.
His first job was working for the Heart Center of Vancouver’s St. Paul’s Hospital.
“Then I realized I am too young to be tied up and work for retirement so I considered other areas of nursing,” he said.
Hernandez said choosing to be a travel nurse was a decision that he does not regret. He said it’s one of the highest paid nursing speciality in Canada.
And for someone who likes adventure, going to places is already a plus for him.
“I love that you will be able to explore Canada. You are paid to explore the country. Hotels and Air Canada flights are free,” he said.
But is it worth it in terms of pay? Well, Hernandez’s two houses and a bachelor’s pad, plus a car–all in Canada–and the luxury to take leisure trips, probably says it all. Not only that, he is still able to help support his siblings’ education back in the Philippines.
“I send my three siblings to school. One is taking up Masters of Science in Nursing (MSN), the other one Bachelor of Science in Pharmacy (BSPh), the youngest will be taking Bachelor of Science in Medical Technology,” he said.
But just like other Filipinos working overseas, Hernandez also battled loneliness and isolation.
“The trick to life is you make it look easy,” he said.
With all these blessings could there be anything else that he wants?
“I want to go back to school and put up a business,” he said. Hernandez said he is thinking of pursuing medicine this time. As for business, he wants to open up a coffee shop in Canada someday.
Is there a secret to his success?
“Make yourself globally competitive and marketable. Invest on hard and soft skills, certificates and qualifications. We are known to be caring people, so relive the legacy,” he said as an advice not just to aspiring Filipino travel nurses.
He noted that while we cannot prevent people from leaving the country in search of better opportunities overseas for themselves and their families, we can still encourage them to return and share the wealth of knowledge they learned abroad to future generations.

Want to join the discussion?
Feel free to contribute!